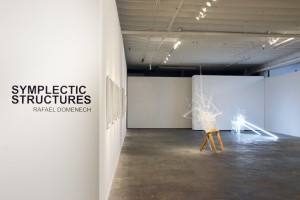 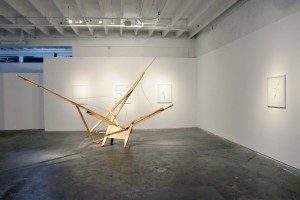 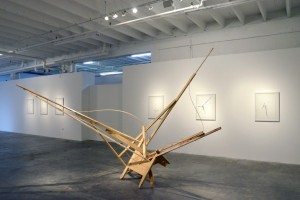 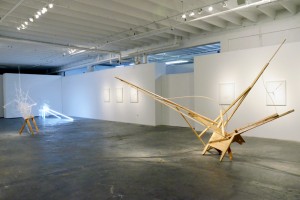 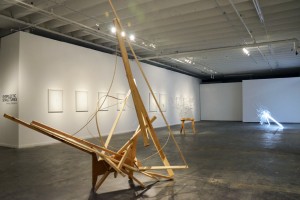 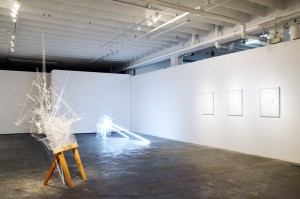 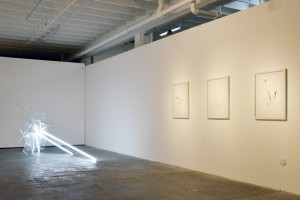 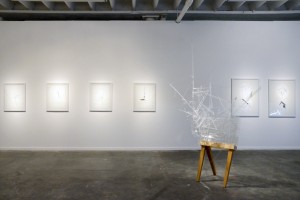 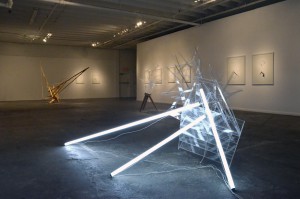 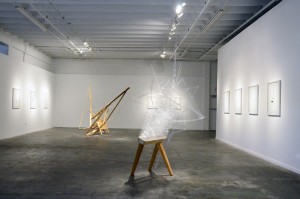 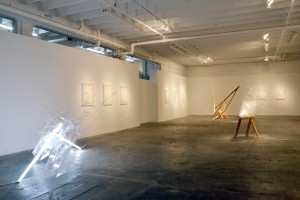 Introduced in 1939, by  H. Weyl, the term symplectic comes from the Greek sym-plektikos (συμπλεκτικός) meaning “that intertwine” or “connect”.  Determined essentially by a complexity of subspaces on which the structure vanishes itself, the symplectic topology measures the area by using complex curves instead of real ones, proposing a totally new approach to the embodied object, and predicting certain unexpected behaviors of the represented systems.

Something similar occurs during Domenech’s creative process. Interested in the deconstruction of artifacts from different provenances –sometimes object-trouvés from our daily life (wood, tape, discarded industrial acrylic sheet, fluorescent lighting), and others his own previous work, the artist reverses the act of destruction/deconstruction into a discovery process that does not exclude failure. This intense practice does not envisage, actually, any result, except the exploration per se in space and structure which, eventually, can lead to new systems of interpretation of the original objet and the space it inhabits.

The outcome is a tensional system that could be embodied under the term of conceptual abstraction. Dealing with pressing issues related to contemporary art such as the occasionally excessive rhetoric associated to the artwork, Domenech gets rid of all the theoretical background, starting from scratch. This depurative exercise, like Rauschenberg’s 1953 “Erased de Kooning Drawing,” acts as a purge that presupposes the emancipation from the artist’s own previous artwork and his former educational experience. The negative statement prepares the ground for a total new departure in which the artistic tradition and the artist’s own personal identity is at stake. Once the process comes to an end, the series ceases to exist, and becomes raw material for an entirely new deconstructive process.

It is in this “interval” between finished work that the meaningful experience occurs; the final artifact being a bare reminiscence of the bittersweet struggle of venturing into the plane or disarticulating the ordinary structure in favor of a new path.

The determined scrutiny into the space, favors industrial materials over craft techniques and color, while the inquiry about art pushes for the eradication of any sign of emphatic authorship and, consequently, the ultimate erasure of the artifact. This critical endless sense of departure –the end of a series being only the beginning of the next one- accentuates process as the ultimate goal of the creative progression, encompassing with the démarches of other artist such as Victor Acconci, Joseph Kossuth, and David Altmejd.

Animated by the abstract sublime, these symplectic structures propose an entirely new subspace where the immensity and the minuscule cohabit in a stimulating allegory about art and everyday life.